On our several trips each summer driving north along the Maine coast, we often get to Wiscasset around lunch time.  Wiscasset is a lovely old town, though for through-travelers it does often create a bit of a bottle neck on old Maine Route 1, especially on summer weekends. A low speed limit through town, a long two-lane bridge over a huge expanse of the tidal Sheepscot River, a red light, and two lobster shack operations right there at the bridge are likely culprits. These are not complaints, merely observations.

It's amazing to me that a town of 3,732 (2010 census) was once the busiest seaport north of Boston (before 1807), and was a center for shipbuilding, fishing, and lumber. The name Wiscasset comes from the Abenaki word that means "coming out from the harbor but you don't see where."

Heading north, on the left just before crossing the bridge over the Sheepscot River is the famous Red’s Eats, where a long line starts early for its famous lobster rolls. One can expect a wait of over an hour on many days.  I’m not sure when they open, but I have seen the line starting at 10am. 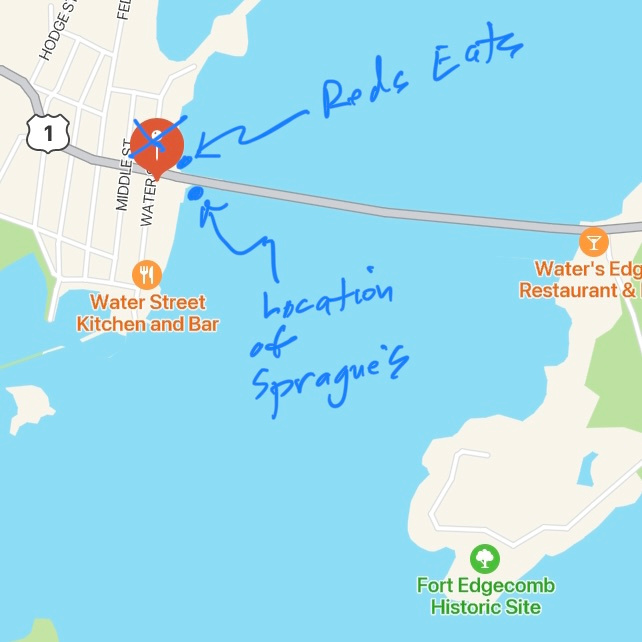 We’ve been to Red’s, but only once, just to say we did.  Now, we drive past Red’s, and turn almost immediately right into a small parking lot next to a picturesque wharf on which is located Sprague’s Lobsters. The lobster rolls here are as good as any, in our opinion.  And the view is spectacular. 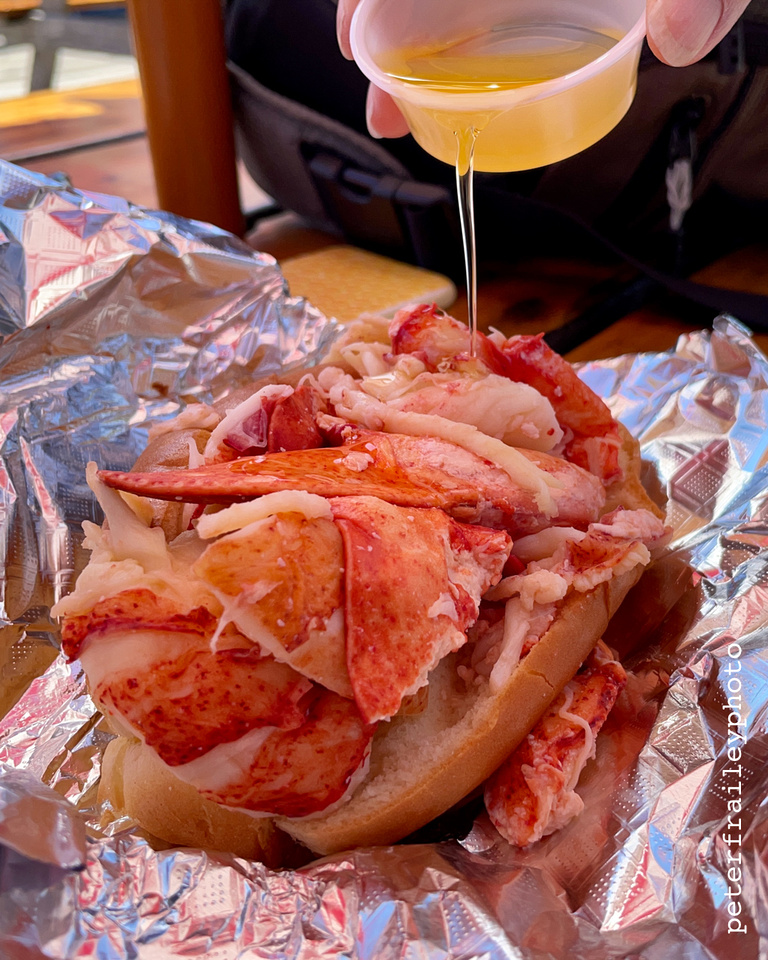 Like Red’s, Sprague's advertises that each lobster roll holds more than one lobster. The line is shorter and you can finish off with an ice cream cone if you wish. The menu is extensive (you can view it on their Facebook page), but we’ve never done anything but order lobster rolls and fries.

All dining is outdoors on picnic tables.  Like most lobster shacks, you order at the window and are given a number.  When your number is called you go get your tray. After you finish eating, you bus your own tray. Simple. 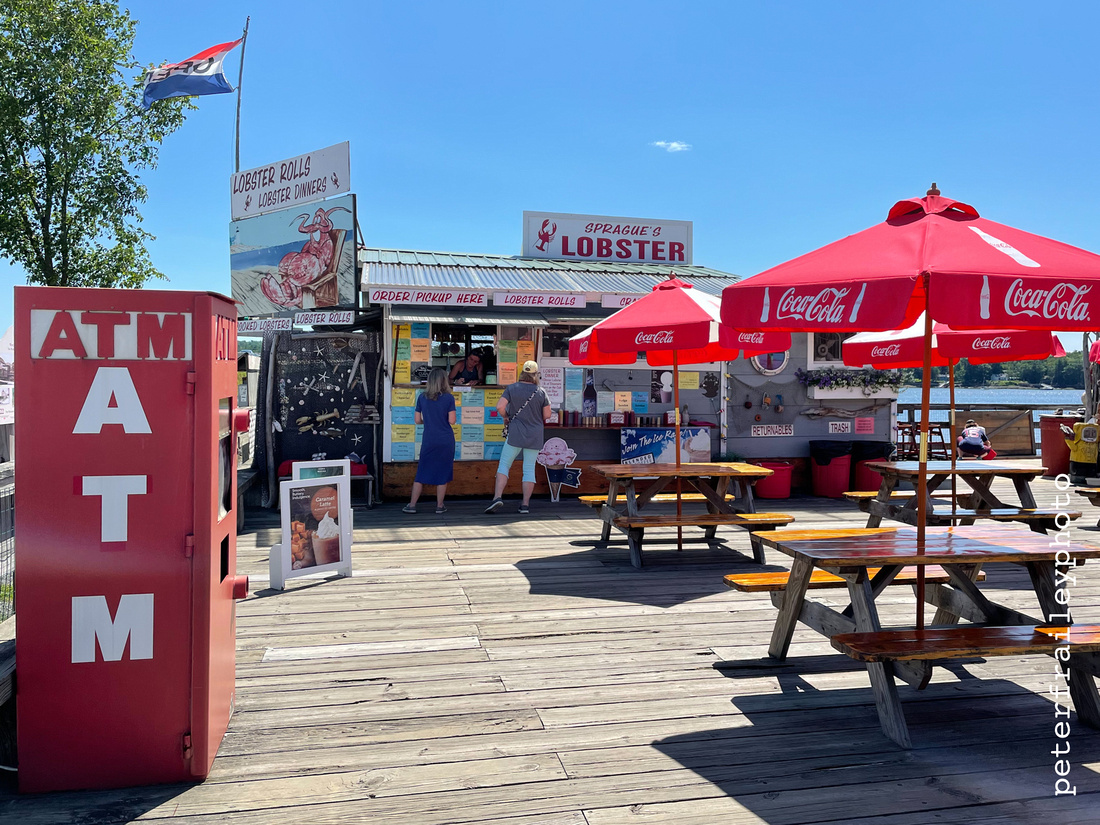 No line at 11:30.  Perhaps a bit early for most for lunch,
but this was the time we rolled through Wiscasset.
ATM is framed as a bit of humor... the cost of a lobster roll has skyrocketed ($28!) 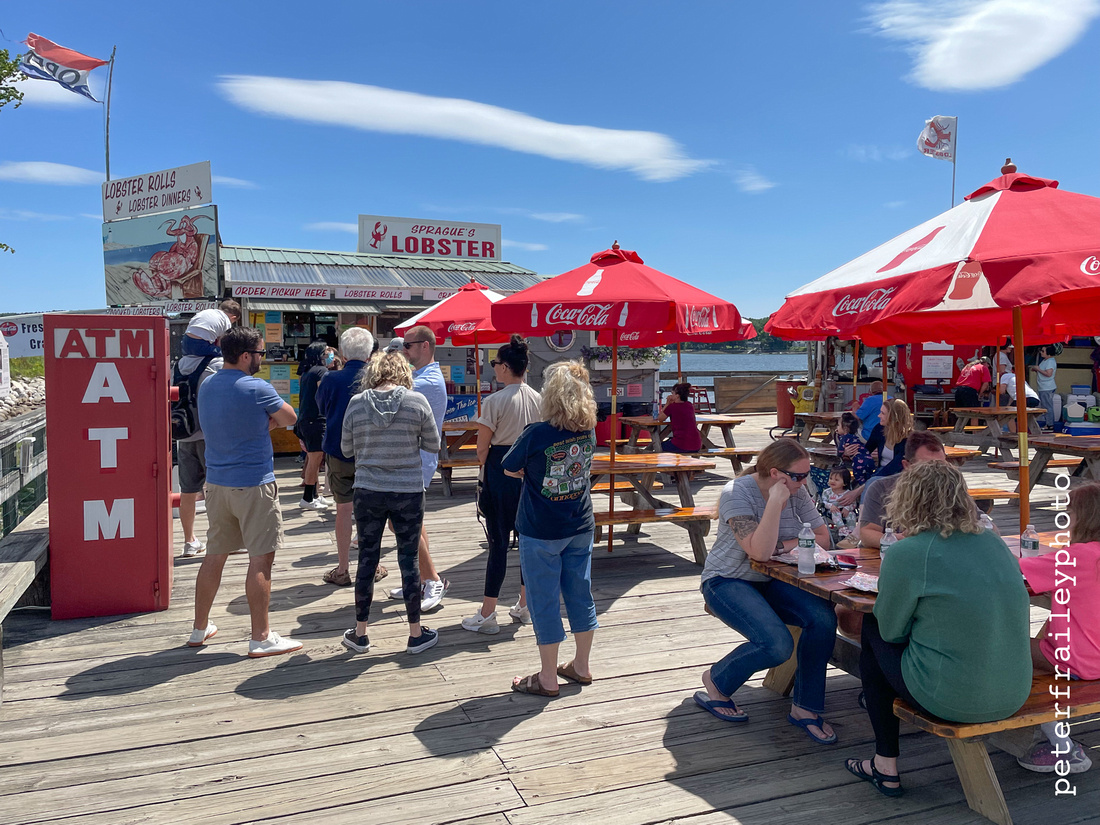 Orders are taken at a window in the building barely seen in the middle of this pano photo.
Lobster dinners are boiled and prepared in the building on the right (see below too)
where also the ice cream is served. 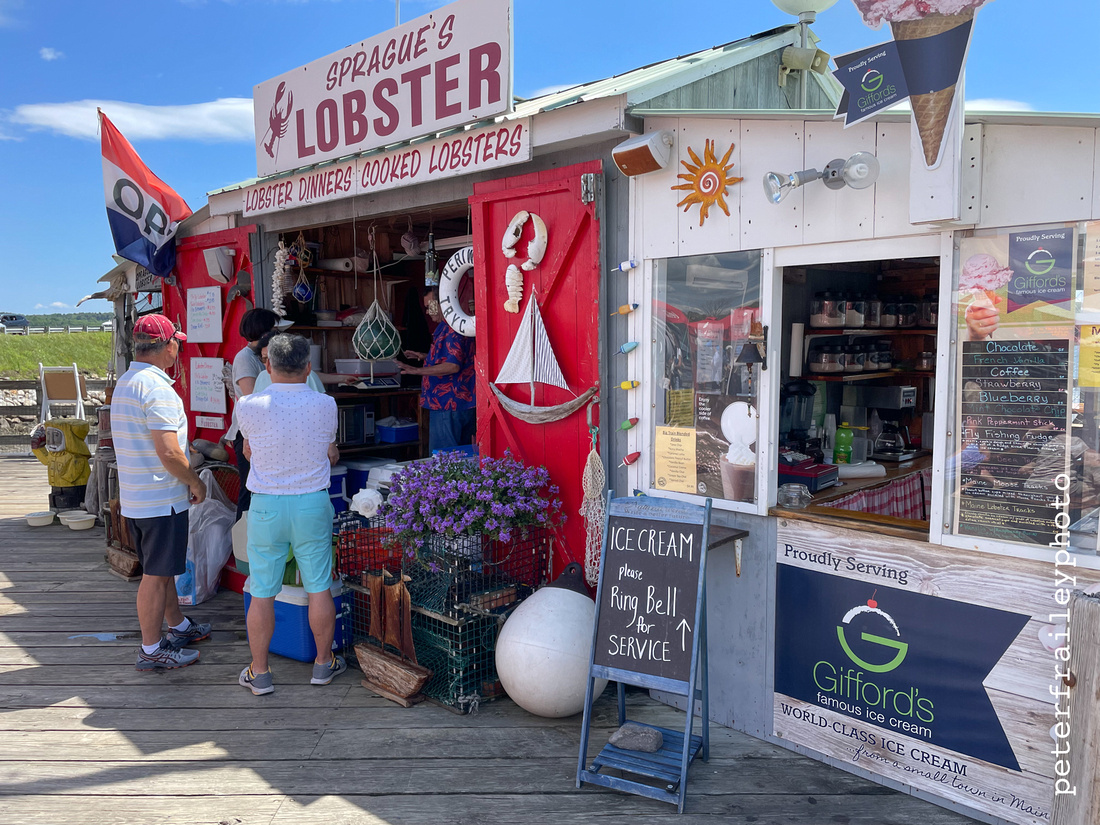 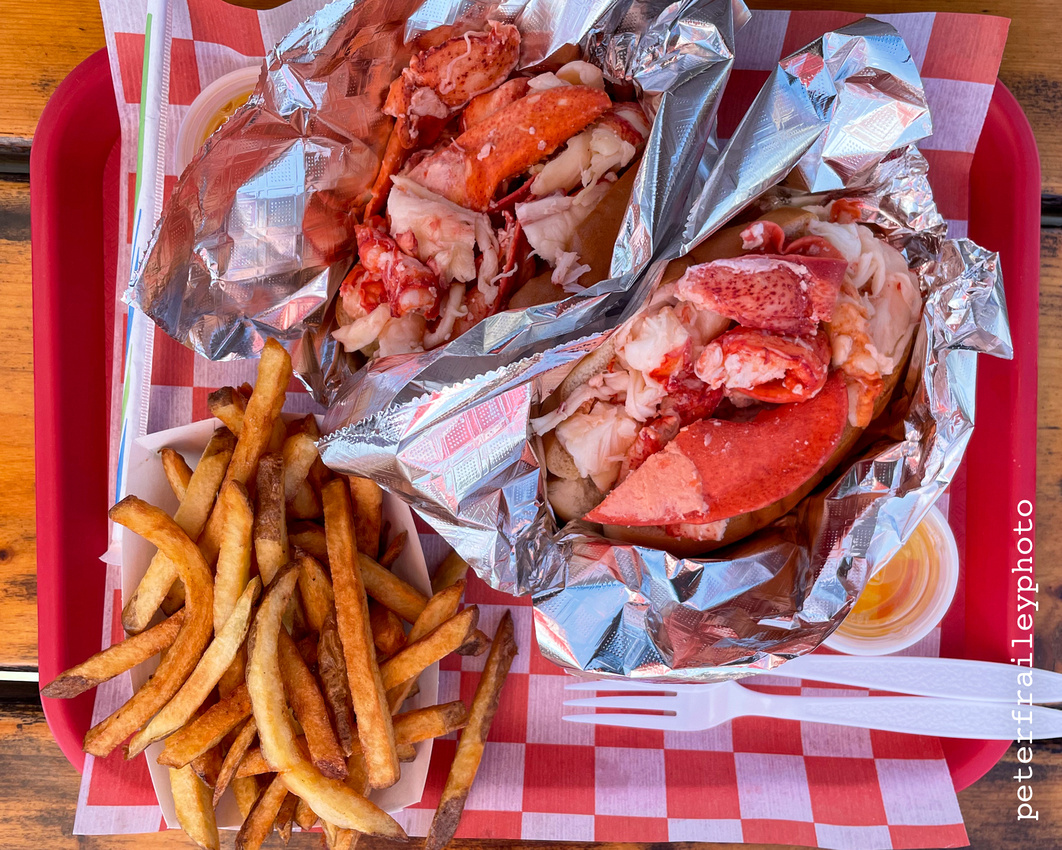 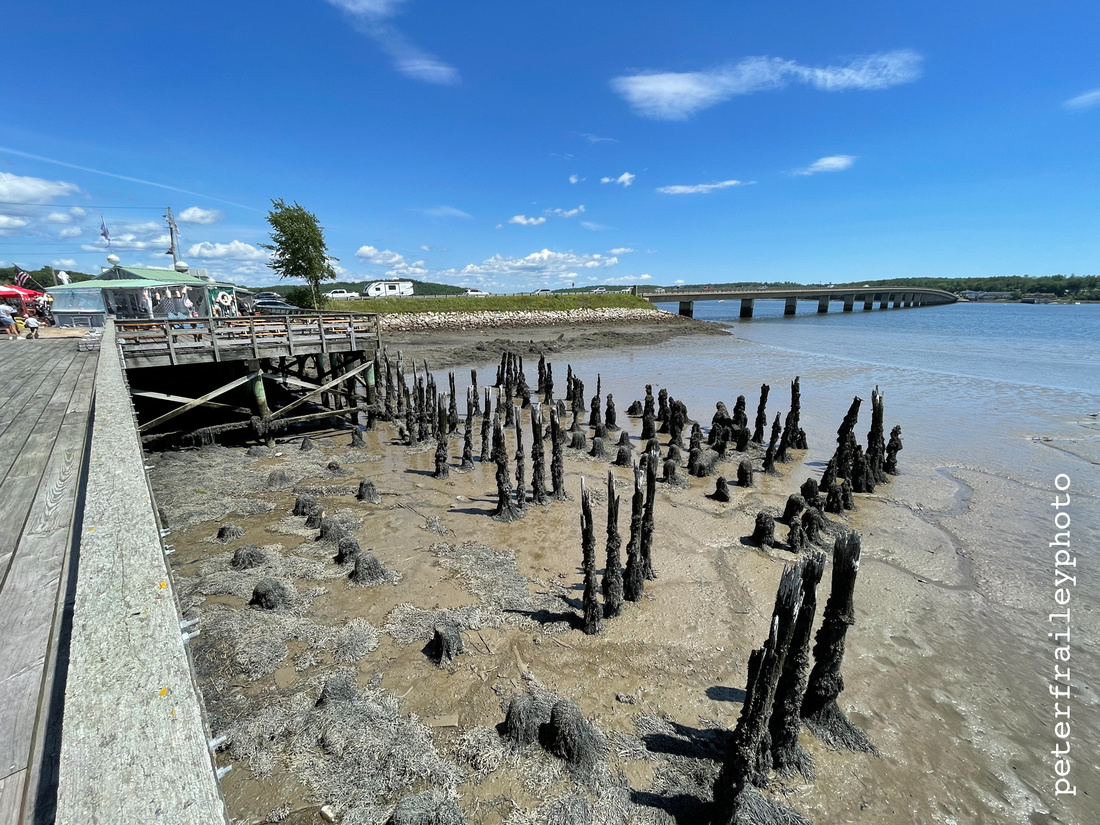 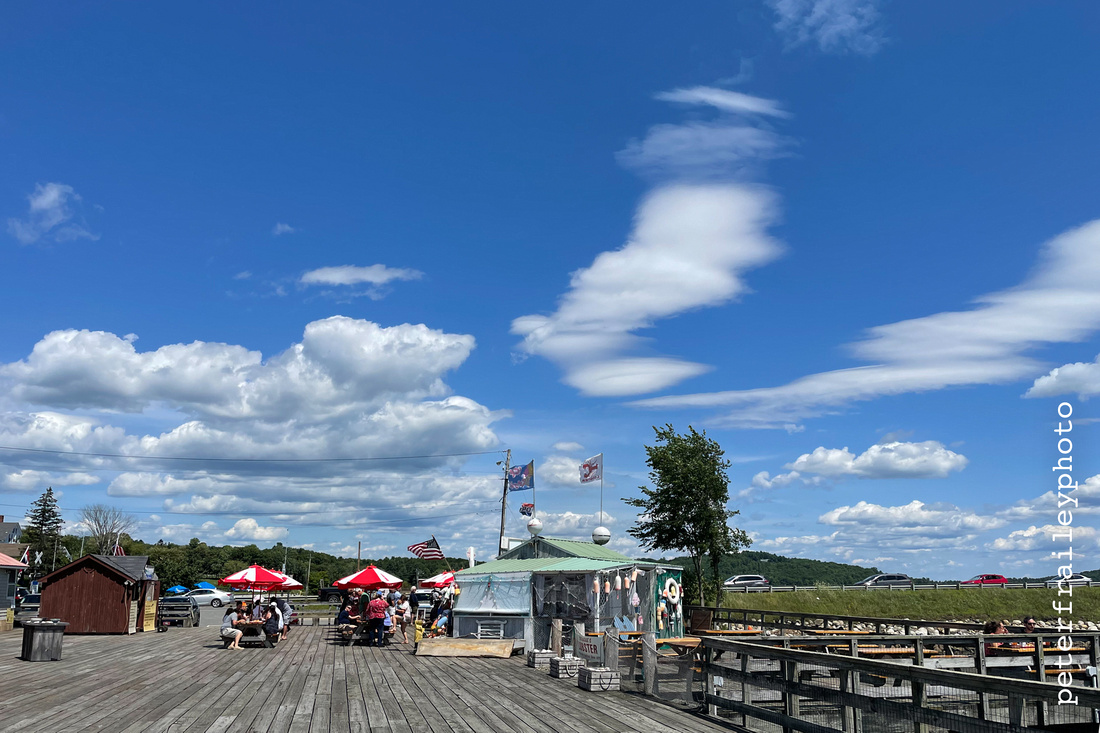 This photo is all about the clouds.